Each player gets a cup with five poker dice and eight dollars. Each turn, a player will put together a poker hand and depending on the roll, take control of various key places in Dice Town that will allow him to perform the corresponding action of the location.

In a turn, all players shake their cup and take out all but one die, which is kept apart from the others. They repeat the process with the remaining dice until all five dice are on the table. Players may want to keep more than one die; they pay one dollar for each additional die.

Now the locations are checked…

Nines: In the gold mine, the player with the most 9’s may take one nugget from the mine for each nine he has thrown.

Tens: In the bank, the player with the most 10’s may rob the bank and take all bills there – each two bills represent one victory point at game end.

Jacks: The player who has the most J’s goes to the general store and draws as many cards as he had thrown J’s, keeping one. These cards may give from one to eight points, or entitle a player to perform the saloon or general store action twice in a row, place a die with a result of a player’s choice under the cup without rolling, or steal 4 dollars from another player. There are many more cards of this kind that spice up the game.

Queens: The player with the most Q’s in his roll wins the favor of the girls, and takes advantage of their charm to steal from an opponent. He may take as many cards from his opponent as he has thrown Q’s, keeping one and giving back the others.

Kings: The player with the most K’s becomes the new sheriff; he decides who wins in any ties, but the sheriff can be influenced with nuggets, cards, or money.

Finally, if a player did not win anything during a turn, he might visit Doc Badluck where he can choose any one of the following:
– equip oneself with barbed wire – the player has two property claims that cannot be stolen;
– draw the first card from the general store pile;
– all other players must give the player two dollars;
– an ace will bring a nugget from every other player.

The game ends when there are no more gold nuggets in the mine or when all property claims have been issued. Players count their points: 1 for each nugget, 1 for every two dollars, 5 for whomever is currently sheriff, and each general store and property card for its value. 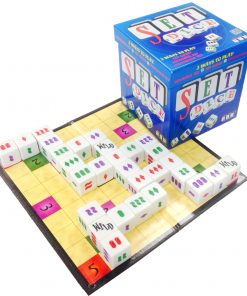 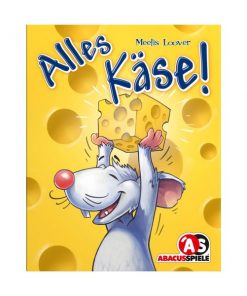 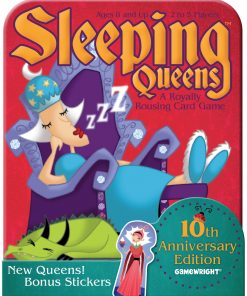