460 Locomotive with Tender employs all technical solutions UGears have come up with for previous models, and more. It looks realistic and unique at the same time and shows off the UGEARS style and modeler skills prominently.

Spinning gears, pistons and wheels carry the body and soul of XIX century engineering, when locomotives represented the mainstream of technical progress, the time of a fierce competition between the developed countries in steamers’ construction.

It is the largest model, rich with details, the fanciest model of the entire UGEARS range with the largest number of parts. Completed, the Locomotive stands out as a truly original piece of mechanics that required diligent assembly work. (Although it may look complex, it is not that hard to build).

Using the massive gearwheel array, this relatively big model can run up to a distance of 5 meters. The distance and speed depend on the winding of our largest 12 rubber band engine. The engine is started with a lever near the driver’s window.

We’ve tried our best to make locomotive main mechanism move as close to the real thing as possible with asynchronously operating piston and valve. They’re clearly visible inside the model, allowing a spectator to see how steam would get into the Locomotive’s steam chamber. The little doors and roof hatch let you take a look inside the Locomotive’s cabin, complete with an instrument panel and a retractable ladder beneath the door. Be the first to review “Ugears: Locomotive with Tender” Cancel reply 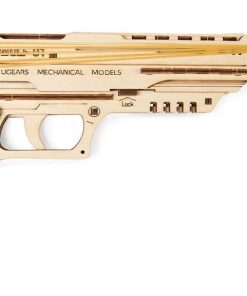