Rob began playing board games as a boy in the late 1960’s in America, but became a real fan when exposed to more advanced board games in the mid 1970’s (like Kingmaker and Starship Troopers from Avalon Hill, for those who remember that time). He has been playing them ever since. Board games and game design remained a hobby for thirty years, while Rob went through graduate school, worked as a Biochemist for 10 years, and then in Software for 15 years. After moving to Thailand in 2007, Rob started seriously considering making board games his third career. Rob and Pui have dreamed of opening a game store for years, and are thus very excited to bring you More Than a Game Cafe. Please come and find out why we love board games so much.

Pui was born and raised in Bangkok, and wasn’t exposed to board games until she met Rob. She quickly became a great fan of board games, matching Rob in passion. Pui has a degree in Statistics and an MBA, and worked in international logistics and supply chain for a major multinational corporation for several years, before joining Thailand’s largest independent consulting firm a decade ago. Pui brings her business experience and passion for board games to the store, with the goal of sharing board games and their benefits with as many people as possible. 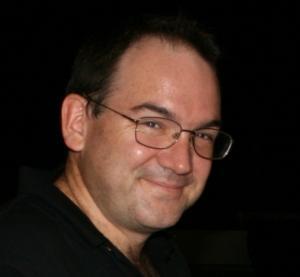 The name “More Than a Game” really chose itself. Having been an avid board game player for something like 40 years, I have a unique perspective on the long-term benefits playing all those games gave me. In my career I have been a research scientist, product and production designer, software coder and tester, team lead, supervisor, and manager. Somewhat to my surprise, I realized that most of the skills that I have found most important are skills I learned through playing games. The interactive skills have been every bit as beneficial as the logical and strategic skills. In retrospect, it seems obvious: trying to convince a co-player in Settlers of Catan to trade a specific resource isn’t much different from getting a colleague to release some material you need for your project. And if you make a mistake while playing a game, the consequences are far less dramatic. Thus, playing board games are fun and engaging, yes, but they have an impact far beyond the game itself. That is why we are called “More Than a Game”.

More Than a Game” really says what we are trying to achieve. People learn faster and better if they are having fun, and with so many games of so many different types, I see a huge potential for helping many people become more effective, and lead better lives. I see how many of the games use the same skills I used working in multinational companies, and wish I had started playing games earlier.

What good are board games?

“What good are Board games?” Far more than you probably expect.

But first and foremost, they are fun. It is fun to play games.

Some people make the mistake of thinking that just because something is fun, it can’t be powerfully beneficial as well. Board games are a prime example of this.

Board games use a large number of skills, including  resource management (games where scarce resources drive strategy, like Settlers of Catan, Princes of Florence, or Connect!) strategizing (any game where planning more than one turn in advance is needed to win, like Chess, Dominion or Game of Thrones) calculating odds (used in any game where luck is involved, such as Risk, Bang!,  or Carcassonne), negotiation (where winning depends on interacting with others, such as Settlers of Catan, Lords of Vegas or Bohnanza), and so on. Board games usually exercise several skills in differing amounts, to make the game more interesting and fun.

In all board games, players actively engage in all of the skills that game needs. They practice those skills in the most effective way – by using the skills, and using them with others. Better still, not only are these skills exercised, they are practiced in a fun setting where mistakes have little consequence. That is, you can try out different strategies without having to endure real-world consequences of mistakes or misjudgments.  And when real-world situations do arise the player has some experience to draw upon, so their actions are informed by previous experience and far more likely to be effective.

So when anyone asks “What good are boardgames?” I  think of all of the above, and then boil it down: “Far more than you expect.”